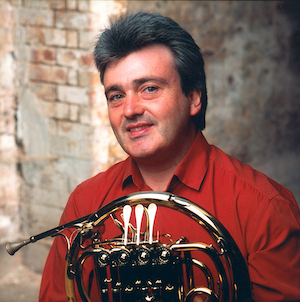 Richard Watkins has become one of the most sought-after horn players of his generation and is well-known as a concerto soloist and chamber music player.  He was Principal Horn of the Philharmonia Orchestra from 1985 until 1996, and is currently a member of the Nash Ensemble and a founding member of London Winds and the Transatlantic Horn Quartet.

Richard has appeared at many of the world's most prestigious venues in the UK, Europe and the USA, and has worked with conductors such as Giulini, Sawallisch, Salonen, Slatkin, Sinopoli, Rozhdestvensky, Andrew Davis and Mark Elder.  His extensive discography includes recordings of the Horn Concertos by Mozart (IMP), Malcolm Arnold (Conifer), Glière and Ethel Smyth (Chandos), as well as Mozart’s Sinfonia Concertante (DG) and Poulenc's Chamber Music for Horn (Hyperion).  In recital, Richard regularly performs at the Wigmore Hall with singers such as John Mark Ainsley, Ian Bostridge and Mark Padmore, and with pianists Barry Douglas, Julius Drake, Roger Vignoles and Ian Brown.

Richard is closely associated with promoting contemporary music for the horn.  He has given premières of concertos by Maxwell Davies, Osborne, Lindberg, Muldowney, Lefanu, and Colin and David Matthews.  Recent premières include Bleak Moments by Mark Anthony Turnage for horn and string quartet, Colin Matthews’s Time Stands Still for horn, violin and piano, a performance of Colin Matthews’ Horn Concerto at the 2006 BBC Proms, and a horn quintet by James MacMillan which was première d at the 2007 Cheltenham International Festival. Most recently he played Eleanor Alberga’s Shining Gate of Morpheus at the 2019 Arcadia festival recording the work for Navona shortly afterwards.